Brain scans reveal for the first time that eating plenty of salmon, mackerel and sardines protects against Alzheimer’s by boosting blood flow and memory 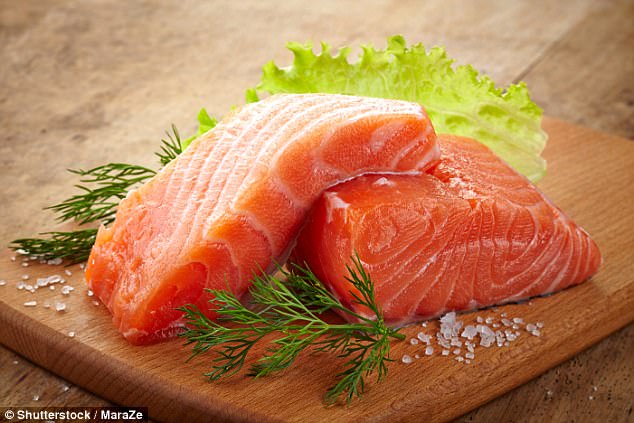 Omega-3 fatty acids, found in oily fish, increase blood in brain regions that control memory and learning – both of which are destroyed by the neurological disorder, researchers found.

People who eat a lot of oily fish are also better at acquiring and understanding new information, the study adds.

Lead study author Professor Daniel Amen, of Amen Clinics in Costa Mesa, California, said: ‘This is very important research because it shows a correlation between lower omega-3 fatty acid levels and reduced brain blood flow to regions important for learning, memory, depression and dementia.’
How the study was carried out

The participants were categorised into two groups depending on their omega-3 consumption.

Study participants were scanned on 128 regions of their brains while they performed various computer tasks that measured their mental skills.

-Simple dietary changes could prevent our risk of developing the condition

Results, published in the Journal of Alzheimer’s Disease, found people with high omega-3 levels have more blood flowing into the brain regions associated with memory and learning,

They are also better at acquiring and understanding knowledge, the researchers found.

The findings further demonstrated overall mental and emotional health is stronger in those with high omega-3 levels.

Co-author Professor William Harris, of South Dakota University, said: ‘Although we have considerable evidence omega-3 levels are associated with better cardiovascular health, the role of the “fish oil” fatty acids in mental health and brain physiology is just beginning to be explored.’
Dietary changes could lower your risk

Professor George Perry, of Texas University at San Antonio, said: ‘This study is a major advance in demonstrating the value of nutritional intervention for brain health by using the latest brain imaging.’

Previous research has found many brain-related conditions may be prevented or even treated by good omega-3 fatty acid intakes.

The scans in the study are only recently being used to determine dementia risk, having previously been employed to assess blood flow in the heart.

Yet, some experts warn the study fails to assess how omega-3 levels specifically combat neurological disorders, such as dementia.

‘This study points to a link between higher levels of omega-3 and certain indicators of brain health, but did not look at any potential long-term benefits against conditions like dementia.

‘While some previous studies have drawn a link between diets high in omega-3 and a lower risk of dementia, it is unclear how much this effect might be down to other aspects of a healthy diet.

‘Foods that are high in omega-3 include oily fish and certain nuts and beans. Diets that include these foods, along with plenty of fruits and vegetables and limited processed or sugary foods, have been linked to a range of health benefits.

‘While research continues to unpick factors that can affect dementia risk, the best current evidence suggests that adopting a healthy diet while not smoking, staying mentally and physically active, only drinking in moderation and keeping blood pressure and cholesterol in check, can all play a role in maintain a health brain as we age.’